Skip to content
You are here:Home » Wash and learn
Equipment Projects Features 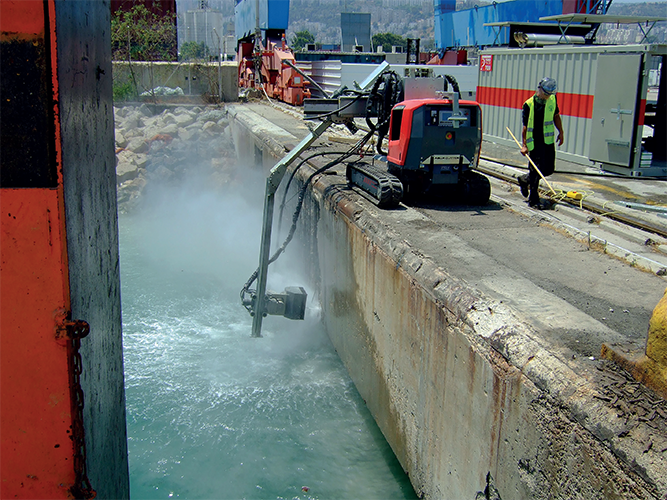 To reduce injuries and increase efficiency, contractors are increasingly turning to Hydrodemolition to handle these concrete rehabilitation jobs.

Hydrodemolition uses high-pressure water jets as powerful as 40,000 psi manipulated by an automated robot to remove layers of deteriorated and damaged concrete. The high-pressure water exceeds the strength of the concrete to widen existing pores and microcracks, breaking it apart in a controlled manner.

Here are five key advantages of Hydrodemolition:
1. Superior bonding
Alternative techniques such as handheld breakers tend to leave layers of dust and damaged concrete with small cracks extending as much as one inch (25 millimeters) into the residual concrete. As a result, the profile could potentially spoil the bonding for new concrete.

Hydrodemolition, on the other hand, leaves a rough, irregular surface after removing the initial layer of concrete. This ‘craggy’ profile is proven to provide better bonding strength. Independent pull-off tests have shown that the bonding strength from Hydrodemolition robots is much higher than what’s achieved with a jackhammer or mechanical method. The average failure stress while using robotic Hydrodemolition can be more than 2 MPa.

2. Extended structure lifespan compared to jackhammers,
Hydrodemolition is an impact-free process, eliminating the vibrations that cause microfractures — miniscule cracks in sound concrete that significantly damage the structure’s integrity.

Handheld pneumatic tools and milling machines also leave rebar damaged and susceptible to rusting. Although Hydrodemolition’s high-powered water jets are devastating to concrete, they do not damage steel rebar. As a natural result of the high-pressure water, rust and scale is removed, leaving the steel clean and intact, even directly underneath. The method virtually eliminates ‘shadowing’ as well.

This combination of benefits results in repairs that last up to three times longer. The Swedish Cement and Concrete Research Institute (CBI) determined a repair life expectancy of 21 to 35 years with Hydrodemolition robots compared to seven to 12 years using mechanical chiseling. 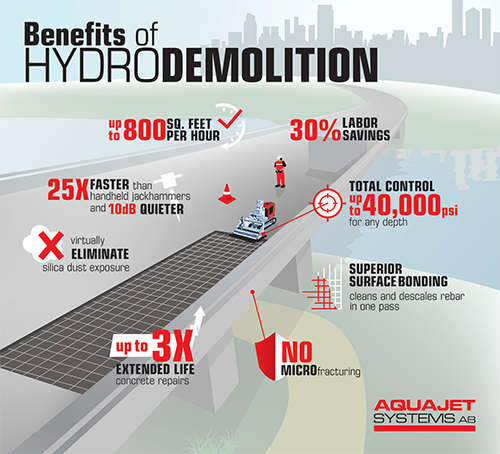 3. Increased productivity
A Hydrodemolition robot’s high-pressure water jet removes concrete by widening existing pores and micro cracks in the weakened structure. This process is more efficient than mechanical methods, allowing the user to complete jobs more quickly — and up to 25 times faster than with hand lances.

One operator generally controls the machine and can complete concrete removal tasks as fast or faster than multiple workers. For example, some Hydrodemolition robots can remove as much as 800 square feet (74.3 square meters) of concrete bridge deck at a depth of four inches (ten centimeters) per hour, a fraction of the time it would take a crew with handheld breakers.

Additionally, Hydrodemolition robots’ compact nature allows them to reach tight, confined spaces. Various design features and additional attachments also allow for work on any vertical, curved or horizontal surface. This greatly increases productivity and reduces the number of tools needed on a jobsite.

4. Less labor and more safety
Hydrodemolition units require less labor and cause fewer injuries than other methods, such as chipping hammers and handheld water jetting equipment.

Hydrodemolition robots allow operators to monitor their work at a safe distance from hazards such as ledges common in bridgework, flying debris and harmful silica dust. In addition, by eliminating the need to stand near a ledge, contractors save time otherwise spent setting up fall abatement systems.

The combination of high pressure, water volume and precise, robotic-controlled movements creates a powerful, efficient system that allows operators to take a hands-off approach. This eliminates fatigue and long-term injuries, such as nerve damage and hand-arm vibration syndrome, common with handheld equipment. These injuries can result in more worker’s compensation claims down the line, and may cause company insurance premiums to increase.

Hydrodemolition robots generally produce less noise than a handheld pneumatic tool and the sound is limited by the machine’s hood. The quieter operation allows contractors to work in residential areas or avoid busy travel times by working duringhours when noise levels are restricted.

Hydrodemolition continues to grow in popularity with contractors, project stakeholders and government agencies around the globe. The machines’ ability to tackle projects in record time while improving safety is appealing to those looking for ways to speed up concrete removal while increasing ROI.

Roger Simonsson is the CEO of Aquajet. He has more than 30 years of industry and leadership experience. Aquajet, which was acquired by Brokk AB in 2016, is known as the industry leader in Hydrodemolition machines and solutions, both in terms of quality and volume. The company’s headquarters and production facilities are in Holsbybrunn, Sweden.
www.aquajet.se