With a passion for the construction business, Deugen Development has spent the last 11 years refining its practices to become one of the leading contractors and developers in New Jersey

Eric Gormeley is the fourth generation in a family of builders. His father used to take him to construction sites frequently when he was a child. Together, the two of them started Deugen Development in 2011, with a focus on private work. “The first job we ever had as a company was an addition to a Toyota dealership to remodel their showroom, then we progressed to doing work for a pasta factory and from there, we undertook a project with UHAUL to build self-storage, and we’ve just continued to level up ever since,” says Eric. He speaks with Construction Today about the ways that the company has nurtured its success, and navigated the impact of Covid-19 on the construction industry. 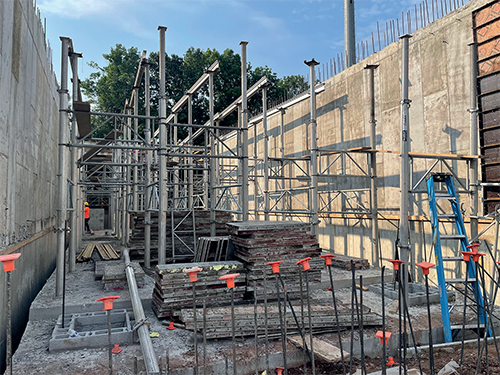 Although the company is a little over a decade old, it has packed those years with a wide ranging list of projects, each of which have been built with exemplary skills and expertise. “Because we’re more of a boutique firm and family-owned, we give all our customers the attention they deserve. They deal directly with the owner, rather than upper level management, which is probably what I would say separates us from our competition.”

The ability to sustain the Gormeley’s dedication and commitment to the construction industry is owed to their passion for witnessing tangible progress. “I just love being able to see developments being made every single day. We’re building spaces that people can thrive in and every time we go to the job site, we get to see progress being made.”

This level of commitment has driven the team to establish a couple of noteworthy projects, a few of which Eric is eager to share with us, beginning with the 1000 North Project; a vacant warehouse on North Avenue in Plainfield, NJ that will be replaced with a new, five-story mixed-use building with 120 apartments around a central courtyard with tons of amenities.

The project sits west of the north-side parking lot for the Netherwood Train Station and will face Seidler Field. It is the first one proposed within a redevelopment area bounded by Leland Avenue, the Raritan Valley Line, Berckman Street and North Avenue. “We are the general contractors at 1000 North Avenue. The developer is Iron Ore Properties.

“This is an interesting project – it is an urban infill rehabilitation project. It is 100 percent lot coverage and it is also in a flood zone. Typically, you won’t be able to build in a flood zone and it required a large amount of water retention under the building that can get quite costly. We ended up building a flood chamber underneath the building in the parking area to accommodate the amount of water that needed to be stored on site.” 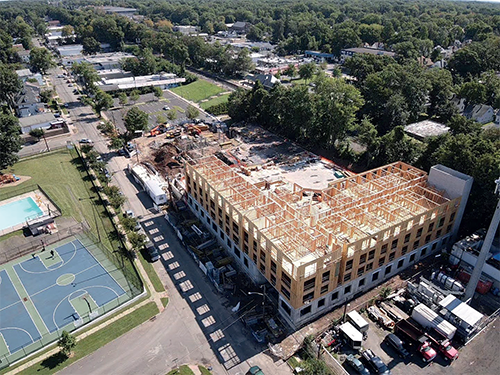 Another project that Eric shares with us is a 50,000-square-foot industrial warehouse in East Rutherford. “It’s another infill, adaptive reuse development, that is taking an old chemical plant that needed to be cleaned and turning it into a best in class industrial warehouse.

“I haven’t actually undertaken any industrial warehousing projects before. I was planning on purchasing the project to do smaller flex space, but after much deliberation we determined the highest and best use of the space would be to have one or two tenants on the property,” says Eric.

Although, project-wise, the company has had great success, the pandemic has taken its toll on the business’s operations, particularly concerning its supply chain network. “The impact from the last two years has made getting materials very difficult. Some of the differences are that all of our contracts, for the most part, are typically lumpsum contracts and don’t have any room for cost escalations with materials. I would say any of the contracts that we’re writing right now, we have to negotiate with the owner a cost increase, simply because we don’t have the ability to absorb a 20-30 percent increase on the cost of material. To counter this problem, we’ve had to go out an secure as much material as we possibly can, as soon as we can.

“With most of the jobs there is going to be the typical lag time, but we’re literally trying to buy anything and everything we possibly can. For example, right now you can’t get any tapered insulation on roofing materials, so we’re trying to buy the roof, and store it because even though we’re not going to need that roof for another eight months, we don’t know by how much we will be slowed down on finishing a project if we ordered those materials in the usual time frame,” he says.

Fortunately, Deugen Development has done well to ensure its relationships with suppliers are in excellent working order. This has been crucial in securing advanced lead time in material delivery and an added advantage has been its ability to sustain exemplary communication. “Sometimes we’re paying for material ahead of time; where we might have had different terms with suppliers previously, they want to be paid even before the material is delivered. The cash flow has definitely changed.”

Despite these adjustments, not much else has had to be modified at Deugen Development to cope with the pandemic. “Of course we did everything we could to keep the guys safe, but there wasn’t a drastic change, as most of the requirements were part of our regular routines already. Most of the time, construction workers wear masks anyway. We conducted our meetings outside on site, instead of having ten people in a trailer and above that, we’re a pretty technology driven company, so most of our stuff wasn’t hugely affected.”

On the note of being a technology-forward business, Eric shares Deugen Development’s best practices regarding its safety, paper trail and how the company will continue to utilize the latest software to maintain its overall integrity. “For the most part, all of our subcontracts are drawn up through Procore, which allows us to minimize the amount of paper that moves back and forth.

“Even our security is all mobile technology. One of the big concerns for this industry is fire and instead of having a fire watch, we have cameras on-site, that can detect any sudden change in temperature and will immediately alert the police, as well as everybody in the vicinity,” he shares.

Now, as we move away from the peak of the pandemic, the company is looking forward to growing its own portfolio, and Eric shares how he is determined to see Deugen Development take on construction projects for itself. “Right now we have a mix of work that we are doing for clients, as well as doing our own developments. However, over the next few years, we are going to be working hard to take on our own contracts and move away from the dependency of customer projects,” he concludes.