Back to Profile Gallery > Wann Properties

Wann Properties looks forward to continuing its legacy of quality and family leadership.

After more than 40 years, Wann Properties has a reputation in its market for high-quality developments. Today, “Most of our clientele is earned through reputation and word of mouth,” President Mel Wann declares.

The commercial development company has earned this loyalty by building in prime locations, using high-end materials and employing skilled subcontractors. According to Wann, success is not due to one person, but “the team that you put together,” he asserts.

A longtime veteran of the construction industry, Wann started the Sewickley, Pa.-based company in 1978, after gaining extensive industry experience operating his own firm, as well as working for others. “I started by working for my brother-in-law, Sam Cole, at 12 years old. After serving for the Army in Vietnam I started my own company in renovation work to put myself through college,” he recalls.

“Once I graduated I accepted a position in Pittsburgh for a National Builder overseeing the North Division, and then went on to work for and become partners in Wilmar Group,” he 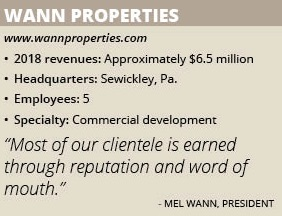 Today, Wann Properties specializes solely in commercial developments and only constructs buildings for its own portfolio. Wann’s daughter, Property Manager Morgan Wann, has joined him in the company and continued his family’s legacy in the industry.

“For the almost seven years, she’s taken over the property management and leasing, and we have come to rely on her for the day-to-day operations,” the elder Wann says. “Morgan gives us a good balance of young and old in the business. It’s good to have her as she has different viewpoints.”

Wann Properties’ current projects include its Blaymore Office Park, a campus of class A office buildings in Sewickley. Mel Wann created the project’s moniker from a combination of his daughters’ names, Blake and Morgan.

Located off of Interstate-79 North at the Wexford Exit, each building in the park will stand four stories. Although the company could have built them with six levels, “We wanted to broaden out the base to give larger footprints to each one of the floors,” he says.

The buildings also will feature full brick facades and top-of-the-line sound barrier windows that will keep the interiors quiet for its tenants. Although they may appreciate the convenience of their location, “They don’t want to hear that they’re near the highway,” Morgan Wann says.

The first floor of each building also features a sculpted ceiling. “Our drywallers were excited to come out [and work on those],” she says, noting that special features are quite common in Wann Properties’ projects.

“Dad has a really different and outside-of-the-box way of thinking,” she says. “He likes to put in thoughtful details such as these.”

Mel Wann explains that these extra features give its subcontractors the chance to excel. “They want to do nice work, but you have to give them the opportunities and tools to do so, as well,” he says.

Wann Properties is seeing many trends in its industry that have required it to adjust, including longer permitting processes. “[That] has really lengthened the construction time,” Mel Wann admits.

“People who are doing leases and wanting to move don’t always recognize what time there is involved,” he says. “They don’t give themselves enough lead time.” The company will advise them on that.

The company also has seen changes in what its clients are asking for. Years ago, “The market went from closed office to open office types of spaces,” he recalls.

Wann now sees the market going in the opposite direction. “People are getting annoyed with having to listen to people next door,” he says, noting that this may lead to a clash of preferences between employers and employees. “Some of our large corporations are going to push back on that because they want to get more people in the square footage, though the employees will want to have more closed spaces.”

Wann Properties has nurtured a positive work environment, which is reflected in its worker longevity. For example, Project Manager Glenn Wagner has worked alongside Mel Wann for 45 years, even before the company opened its doors.

“Glenn has followed Dad from other businesses,” Morgan Wann says. “They are loyal to each other. Glenn takes pride in what we do and how we operate for our employees and customers.”

But Mel Wann’s treatment of employees has kept him loyal. “Dad believes in teamwork, creating relationships with people and taking care of his own,” Morgan Wann says. “You can’t ask for anything better.”

Mel Wann sees a strong future for Wann Properties, which will eventually see a shift in leadership. Already, he has set up a succession plan for his daughter to take the reins of the company when he retires.

“He’s been teaching me and guiding me, and he’s set up a great team,” Morgan Wann says, noting that she has learned about the business from the ground up. “It’s a lot to absorb in the few years I’ve been here.”

But this has been essential, Mel Wann asserts. If a project requires employees to work in cold weather, “You’ve got to know what you should expect out of people,” he says, noting that he wants his daughter to take her future role soon. “She’s well on her way already.”