One Clinton and the reconstructed Brooklyn Heights Library will bring high levels of quality to the community when they are completed in 2020.

Libraries of old were mostly dark places of quiet, solitary study and reading, and often were staffed by strict, schoolmarm-type workers. Today’s libraries, however, offer so much more than this and have vibrant resources for a community. The team behind the reconstruction of the Brooklyn Heights Library in Brooklyn, N.Y., understands the new branch will be a pillar of the community, as well as the physical foundation for a new level of luxury for the neighborhood’s living spaces.

The new library will span more than 26,000 square feet, making it the largest branch in Brooklyn. The reconstruction is expected to generate $40 million for repairs at other library branches in Brooklyn and create more than 100 affordable housing units in two privately owned sites in the borough’s Clinton Hill neighborhood. Additionally, the three-story library will be the base for the new One Clinton tower, which is the residential portion of the overall redevelopment. 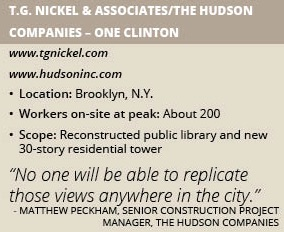 “In this area, this will be one of the most luxurious buildings,” says Amir Mahmoud, senior project manager at T.G. Nickel & Associates, the general contractor on the project. “It is really bringing another level of quality to the area and an improved standard of living. The new library will be wonderful.”

The Hudson Companies is the developer behind the library reconstruction and One Clinton project, and in addition to Nickel, the project team includes Marvel Architects, Studio DB Interiors, DLANDstudio Landscape Architecture, Starwood Property Trust and Related Fund Management. The building was designed to fit seamlessly into the Brooklyn Heights Historic District with Portuguese limestone cladding on the exterior, but this is a project for the community in other ways, as well.

The project team is utilizing a local hire program, Mahmoud explains, hiring people from local zip codes to help stimulate the economy. There are two retail spaces at the structure’s street level: one will be leased by Brooklyn Roasting Company, while the other will have pop-up food vendors curated by Smorgasburg, an open-air food market in Brooklyn. Additionally, the library will have a 9,000-square-foot STEM lab for the students in the neighborhood, which will be operated by the NYC Department of Education.

Before any of these cool amenities can be enjoyed, however, the project has to be completed. The team is close to topping out and finishing the superstructure, so it is on track to turn over the library portion in June 2019 and finish the overall work later in 2020, but there still is much to do. A lot of that is managing the project’s logistics.

“For as large as people think the site is, we are quite limited with logistics on the streets,” says Keith Balvin, senior project superintendent with Nickel. “The building is triangular and we only have two blocks for access. One has minimal lane closures allowed, and we’re also in a residential neighborhood. There are a lot of trees we want to maintain, but the trees also are in the way of access. Therefore, there’s almost an entire block where we don’t have access, and although there is enough frontage for work, there is not enough space for us to take deliveries. Additionally, we’re up against another building on the third side of the project, so we can’t do anything there.”

The library entrance in the structure will be at 280 Cadman Plaza West, while the residential entrance will be at One Clinton. The diagonal Cadman Plaza meets Clinton Street to form the sides of the triangle, with Pierrepont Street to the south acting as the triangle’s base. Matthew Peckham, senior construction project manager with The Hudson Companies, agrees that as amazing as the project will be when it’s complete, the location still poses big challenges to the completion.

“This project is on a confluence of three streets, one of which is a very busy street,” Peckham explains. “Clinton to the west is very narrow, so it’s hard to bring in all the material and then bring out material in an organized process that keeps the project going. Material can be delivered, but logistically it’s always a challenge.”

The logistics will be modified again, Balvin says, when the library is turned over this summer, because the library comprises the entire elevation of Cadman Plaza West, and that is where the project’s logistical maneuvers have free reign at this time. He notes the storefront windows on the ground floor will be left out, so some of the staging for work on the tower can happen in those spaces.

“It requires a lot of coordination and creative thinking,” Balvin says. “We have to focus on how to be efficient with minimal space. For example, we moved the concrete operation and concrete pumps into the footprint of the building to improve our ability to deliver concrete when we need it, which means we also can then deliver other material to that space because without the concrete trucks there, they won’t block access to the loading dock.”

Mahmoud adds it all comes down to additional coordination. Nickel works daily with Hudson, library officials and the contractors working on the library aspect of the project. He says it is always important to communicate one’s own needs and understand the other parties’ needs to come to a mutual agreement and move forward.

“We are trying to expedite the schedule and maintain a good pace,” Mahmoud says. “That means analyzing and reviewing what is required on the project.”

Understanding this is a major project for the community, the project team is dedicated to keeping the community informed of the project’s progression. The project’s website notes what construction work will be occurring each week, and the team provides additional information to the neighborhood when anything major happens that may affect residents’ travel in the area.

“We executed two mass pours of the building’s concrete footings 70 feet below street level” Mahmoud explains. “Over two separate weekends we poured 2,200 yards and 2,100 yards of concrete. We did this on two weekends to minimize the impact on the neighborhood during the week. We worked with the Department of Buildings, the community board, local businesses, fire and police departments, ambulances, Department of Transportation and other local authorities. There was a lot of coordination, and it was a challenge to coordinate everyone and their concerns, but in the end all concerns were met and accounted for. We pulled it off – it was a huge success and the community was grateful for it. We gave everyone advance notice and with that knowledge, they could plan accordingly and their lives weren’t as impacted.”

Peckham notes the project has more than 1,700 windows and each is installed individually. This is in addition to the structure’s nearly 4,900 stone panels. The team is one-third of the way up the structure installing the windows, and it will continue moving forward while completing the interior fit-out. The key, he says, is to work efficiently so the team can maintain the level of quality this project deserves.

“It will be a very elegant building,” Peckham says. “The special cladding with Portuguese limestone gives it the appearance of a stone building, even though we’re using concrete. Additionally, the window-to-wall ratio is so great that it will not be a heavy building on the skyline. It will become a landmark looking from Manhattan into Brooklyn, and the views from the building are spectacular. No one will be able to replicate those views anywhere in the city – almost the entire Manhattan island is laid out before you.”