Samet Corp. is on track to deliver the High Point Baseball Stadium in time for opening day.

Experience can be a priceless asset in the construction industry, making a contractor the best fit for a project. Samet Corp.’s project portfolio of minor league baseball parks made it the right builder for the High Point Baseball Stadium & Entertainment Venue in High Point, N.C.

Grube is the regional vice president of Greensboro for the contractor, which started work on the stadium in December 2017 and will finish before May 1, when the High Point Rockers play their first game of the season. The park will cover 101,800 square feet and seat approximately 5,000 spectators for baseball games and 7,500 for concerts and events. 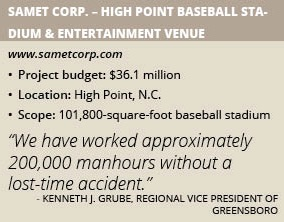 Samet Corp. has worked closely on the High Point Baseball Stadium with design firm Odell. “It’s been a great partnership from the beginning of the project through design and construction,” Grube says.

Odell created the concept for the park, which pays tribute to High Point. Because the city is known for its furniture and textile manufacturing, the stadium has a look similar to a mill building and incorporates exposed, painted steel, wood from a local barn, brick and windows in its exterior.

High Point Baseball Stadium also is being built on a brownfield site where buildings once stood, and has permanent water treatment and dewatering systems. “Around the building and around the field, water is collected, treated and discharged into the sanitary sewer system,” Verstat says.

The design also incorporates a sub-slab passive and active vapor mitigation system, which “exhausts any vapors under the slab and prevents them from getting inside the building,” he says, noting that this is required by the state as a condition of occupancy.

Samet Corp. is on track to meet the stadium’s opening day, but the project has not been without challenges provided by Mother Nature. Last year, Grube explains, was the wettest that North Carolina ever experienced, with the most precipitation on record.

“We lost over 130 days to inclement weather,” he recalls, noting that this included two hurricanes, a 13-inch snowstorm and a high-ground water table it coped with through temper dewatering.

But the company overcame these obstacles by being creative and dedicated. Samet Corp. also partnered closely with its client, the city of High Point, to avoid surprises and often worked seven days a week.

General Superintendent and Field Executive Mike Gobble notes that the project also kept on track thanks to regular meetings with contractors. During the sessions, Samet Corp. reviewed the project schedule with subs. “Some of the more critical trades we were meeting with a couple times a week to make sure we were all aboard with the plan,” he recalls.

Despite the harsh weather and tight schedule, Samet Corp. has maintained a strong safety record during the construction. “At Samet, safety is one of our core values,” Grube asserts. “We have worked approximately 200,000 manhours without a lost-time accident.”

The builder accomplished this by creating a site-specific safety plan, as well as having routine toolbox talks and orientations for subcontractors. In addition, “Our safety department at Samet visits the site on a regular basis,” Gobble says.

“We want everybody to go home at the end of the day just like they came to work,” he continues. “We want them to go home safe.”

On the Same Page

Samet Corp. has emphasized strong communication during the project. “Construction is easy, but communication is hard,” Verstat says, noting that this can make or break a project.

The company has kept everyone on the same page through verbal meetings and by giving them access to project documents and changes through a single online location. “It’s imperative that everyone looks at the same thing,” he says.

“We have people in charge of the document control and making sure that all members of the team had the latest and greatest information at all times,” Verstat says, noting that a spirit of teamwork also has allowed the project to succeed.

The president of the High Point Rockers, Ken Lehner, distributed t-shirts with the slogan “All of Us” printed on them, celebrating how all the principals have collaborated. “It’s taken all working together to make this successful,” Gobble says. “It’s not just a one-man show.”

Samet Corp. is looking forward to opening day of the park, but is getting ready for another project it won from the city: a new police station headquarters and 911 call center that will involve renovations and additions to its existing facility. “We feel we’ve been fortunate to gain their work,” Grube says.