Back to Profile Gallery > Lion Electric

Customer satisfaction is the circuit to success for Lion Electric.

There is quite a lot of competition for electrical contractors in New York City and New Jersey. Lion Electric differs from the competition by the emphasis it places on customer satisfaction. “We believe that doing the right thing is always the right thing, a by-any-means-necessary approach,” President Dave Zeki says. “We want to make sure people are satisfied and that’s the measuring stick we use to gauge our success.”

Take, for example, one of the company’s early jobs, a 53,000-square-foot house in Great Neck, N.Y. The client wanted a fully-automated home but there were no drawings, schematics, direction or even guidance on the project. Lion Electric took the initiative and designed its own schematics in-house, designed the whole system and provided a fully automated/integrated smart home solution to its client. This was no small task as it required a lot of back and forth with the customer to confirm what he wanted in his home in addition to the electrical infrastructure.

“On a regular basis, we find ourselves co-engineering larger jobs,” Zeki explains. “Drawings today leave a lot to be desired. Errors and omission are common.” 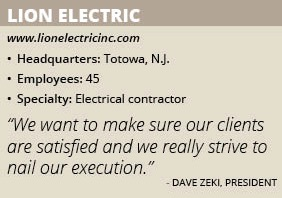 Some electrical firms might say nothing, bill the job and make money on the change-orders. Not Lion Electric. “We would rather raise the issue, get information from the engineers and fix it while it is cheaper to fix rather than waiting until the end of the job and say ‘it is not our problem,’” Zeki says.

Lion Electric does electrical work on commercial and multifamily high-rises although the company also handles retail and office remodels, life safety and low-voltage data communications work. “We basically do it all,” Zeki says. The company works throughout New Jersey and in the New York City metropolitan area for developers, general contractors and construction managers.

Zeki is a fourth-generation electrical contractor who worked on electrical jobs while in college and then for his father’s business before founding Lion Electric in 2009.

Over the decade that Lion Electric has existed, there has been an increasing emphasis on being adaptable. Zeki recalls a 13-story building in New York City the company worked on from April 2017 to January 2019. “We started the building with one set of drawings,” Zeki says. “By the end, there were five entire revisions of the job to meet the tenant fit-out requirements. I found our reputation as a firm really grew because we handled these challenges.”

Technology and the ability to quickly transmit information help Lion Electric in handling those frequent changes. Keeping on top of new technology, equipment and material innovations, however, can be a challenge. “Every day, something new comes out that can help you if you implement it,” Zeki says. “It is dizzying at times.”

To be adaptable, Lion Electric also needed to flatten out its corporate structure. “Now, if there is an issue, anyone can grab their coworker or supervisor and say, ‘How are we going to handle this?’” Zeki says.

Unlike many companies in this time of low unemployment, Lion Electric does not find it difficult to recruit and retain employees. The company prefers to promote from within and get internal referrals for new employees. A solid benefits package with perks and training helps retain employees.

Lion Electric takes safety on the job seriously and requires all employees to undergo 30-hour OSHA training, regular toolbox talks and read and pass a quiz on the company’s safety policy and procedure manuals. “Work is important but going back safely to the people you love is more important,” Zeki says.

Among its projects, the company is particularly proud of a nine-story multifamily building it started work on in April 2018. The 150,000-square-foot building required Lion Electric to place almost 400 receptacles as they were being poured into a concrete deck. “We had to make sure we mobilized in tandem with the superstructure subcontractor and had enough manpower on-site as soon as the axis lines were laid out on the forms,” Zeki says.

Lion Electric has grown 1,500 percent per year the last three years, Zeki says. That growth is thanks to the company’s reputation. That reputation, perhaps ironically, is partially due to not taking on every job that comes along. “Some companies are willing to take on any size project at any time,” Zeki says. “We would rather take on smaller jobs and do a really excellent job of executing and have the customer really satisfied with us rather than taking on a $20 million job and mailing it in.”

To keep quality high, Lion Electric likes to get involved as early as possible in projects so it can let the client know of any issues in the planning or design stage. The company then uses computer programs to measure out feeder and larger conduit runs and makes sure the client has copies.

“For a long time, you work for your name,” Zeki says. “Then your name starts working for you. A lot of companies run into problems when all they care about is the bottom line.”

For the future, Lion Electric aims to continue to deliver a high level of execution and build on its already excellent reputation. “I don’t think we want to get to a place where we have 1,000 people working here,” Zeki says. “We want to be an ultra-high-quality mid-cap firm.”