Safety is paramount at any job site, but even more so when it’s in the middle of an active area – like say, a college campus. “We have a lot of student traffic in the area so careful attention was made to site management and delivery of materials,” says Neal Day, project manager at JP Cullen, the firm building the new Health Sciences Center at Rock Valley College in Rockford, Ill.

The Health Sciences Center is a partnership between Rock Valley College and OSF HealthCare, a nonprofit Catholic healthcare system that operates 11 acute-care facilities and two nursing colleges. The building will host the college’s nursing and medical programs. JP Cullen is the general contractor for the project.

The finished facility will have 117,000 square feet spread between four stories and a partial lower level. The design features a glass and metal panel enclosure with granite at the base and a large set of steps and patio on the south end of building where the topography slopes downward.

That natural topography offered a few advantages to the project. Behind the stairs is a basement area. The extra space allowed designers to move the building’s unsightly HVAC equipment from the roof into the lower level, where it can be more easily serviced and maintained while improving the aesthetics of the structure.

The natural theme is reflected in the look of the building. Rock Valley College buildings tend to have an earth tone color scheme. The coloring of Health Sciences Center riffs off that theme, with brown earth tones on the bottom that gradually fade into white at the top of the structure. “They wanted this building to be a little more modern but they wanted to tie the color scheme back into the rest of the campus,” Day says.

Work on the structure began in May 2016 and is expected to conclude by spring 2017. Crews hit a milestone in early September when they celebrated the topping off of the structure. With the structure complete, work has shifted to enclosing the building.

“We’re one of the few general contractors and CM [construction managers] in the area that still self-performs our own concrete, masonry, steel erection and all the finished carpentry,” Day says. The company’s skill set lent itself well to the project, he explains, because being able to complete those facets of the job using in-house crews accelerates the timeline of the building process.

“This project was attractive to us because of the value of the project and the self-performed work fit our capabilities very well,” Day adds. JP Cullen was selected as the general contractor following a public bid process.

About half of the JP Cullen’s labor force are JP Cullen employees; the other 50 percent come from local trade unions around Rockford. Those in-house laborers will be responsible for as 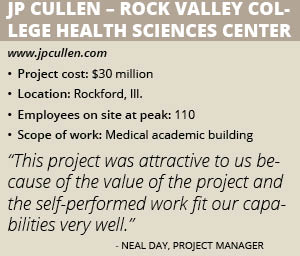 much as 40 percent of the work done on the Health Sciences Center. Area subcontractors will complete the remaining construction, which includes specialized aspects such as mechanical and electrical systems.

JP Cullen is using a combination of 3-D building information modeling and smart devices to ensure a smooth construction process. “Any tradesmen in the building has access to all construction documentation at any time by basically pulling his phone out of his pocket,” Day says.

Environmental Considerations
A number of environmentally friendly systems are being installed in the building to meet its goal of achieving LEED Silver standards. The use of chilled beams and an energy recovery wheel will reduce and recapture power consumed in the building’s HVAC system. But the biggest energy impact will come from the 84 geothermal wells that will heat and cool the facility.

Although geothermal heating can save substantial energy versus conventional systems, it posed a construction challenge for JP Cullen’s crews on this project. In most buildings where geothermal is used, the in-ground heat pumps are located at least 50 to 100 feet away from the structure. But at Health Science Building the geothermal wells are located immediately adjacent to the west side of the building. That proximity created space constraint issues for the site. “We had to plan all of our steel and masonry construction for the east side of the building,” Day explains.

Process Improvements
Safety has always been a priority at JP Cullen, but the company took another step to promote a secure work environment when it introduced a new employee safety program earlier this year. The program encourages every tradesperson to be more attentive to safety issues by using positive reinforcement to highlight good practices.

“We actively do field observations on a daily basis where we encourage the tradesmen to give us feedback on the procedures they are doing,” Day says. “We look for patterns of behavior that create good work environments and bad work environments. Then we reinforce the good and collect data on the others.”

Safety is not the only area where JP Cullen is implementing better techniques. The company uses prefabrication on many of its projects. Making components such as concrete panels in a controlled environment results in better quality than pouring on site and also saves time. “We practice prefabrication as a whole but every job we try to find new opportunities to expand our prefabrication,” Day says.

For the Health Sciences Center, JP Cullen prefabricated the rooftop safety systems and stairways at its own prefab shop. The company also encourages its subcontractors to preassemble as much as possible – one trade built the structure’s window frames off site, for example.

When everything arrives ready to install, it creates a much faster construction flow, which in turn leads to a happier owner. As of late September, JP Cullen was on pace to complete the project seven weeks ahead of schedule.