ZOM Living’s Atelier project will set itself apart from other projects in Dallas.

After four decades, ZOM Living has a strong reputation for its work. “We’re known for having some of the best products in the marketplace,” Vice President Jason Haun declares. “We’ve done projects as tall as 50 stories as well as three stories in suburban neighborhoods.”

The multifamily rental developer is bringing that same level of quality to Atelier, its latest project located in the urban core of Dallas. General contractor Balfour Beatty began building the 41-story building in June 2018.

When finished in early 2021, Atelier will feature two levels of underground parking, 15,000 square feet of retail at grade and a 10-story above-grade parking garage. Level 11 of the building, Haun notes, will feature amenities and the total project will feature 417 living units.

He adds that Atelier’s living spaces will set it apart from other, similar projects. “It’s not your cookie cutter apartment building,” he states.

The living units, he says, feature high-end finishes that are similar to what one would find in condominiums. “The unit sizes also are larger than what you would typically see in a high-rise building,” Haun adds.

Atelier also will feature amenities that include a lobby that displays artwork from community artists and organizations, as well as a pet salon, a game room, a fitness center and a rooftop (garage) pool. “People will be on the 11th floor and look over downtown,” he says. 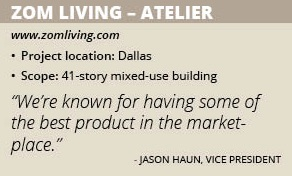 According to Haun, Atelier will appeal to empty nesters who are ready to downsize. “Their kids have flown the coop and they don’t want to maintain the larger homes,” he explains. “They also want to be active and in the heart of the activities center.”

Atelier places residents in Dallas’ Arts District, where they can access performing arts and museum spaces. “To our west is the Nasher Sculpture Center,” Haun says, noting that the Crow Museum of Asian Art is south of the building’s site and the Dallas Symphony Orchestra and AT&T Performing Arts Center to the east with Klyde Warren Park to the north.

Residents will be able to visit the park, which is an urban green space that was built over a portion of the Woodall Rodgers Freeway. “It is a gem in Dallas,” he says, noting that it features a pavilion and a children’s park.

Atelier’s location also appeals to seniors who are not yet retired. “If [your job is in] downtown Dallas, you might walk across the street to your office,” he says. “Its location is spectacular.”

Based in Orlando, Fla., ZOM Living started operations 40 years ago and has developed a portfolio of projects in Florida, Texas, the Mid-Atlantic region, Chicago and the Carolinas. “We’re one of the leading multifamily developers in the country,” Haun says.

He sees a strong future for ZOM Living. As a leading developer, “I hope we continue to be at the top of our game and the top of our industry,” he says, noting that the company is in the process of entering the senior housing space.

“Folks like ours that have predominantly focused on market rate rentals are exploring that,” he says. “We’ve launched a senior housing division internally and have a project that will break ground soon.”

This first development, he notes, will be located in ZOM Living’s home state of Florida. However, “We’re pursuing opportunities in all the markets we currently operate in for future senior housing projects,” he says.