While it may look white to the naked eye, light comes in a spectrum of colors. “If you take a white sheet of paper and put it under a dining room light, the paper will look different than if you took it outside and looked at it,” points out Jung S. Kim, executive vice president of Samjin LED, the U.S. subsidiary of Samjin LND Co., of South Korea. “What you’re seeing is the effect of correlated color temperature of the light.”

Different colors from the light spectrum could impact people in different ways. Samjin refers to that concept at “human-centric lighting.”

Human-centric lighting is connected to the circadian rhythms of human beings. “That means your body clock wants to go from morning to evening to night and not be stuck in a static-lighting environment,” Kim explains.

Human-centric lighting has been applied in different environments. Perhaps the most interesting was in 2013 with Samjin’s first U.S. adopter, the Seattle Mariners baseball team. “The co-owner of the team, the late Paul Allen, was trying to figure out a way to offset jetlag for West Coast teams,” Kim says. “West Coast teams would go east on a road trip and them come back still stuck in East Coast time. [To players] a 7:30 p.m. game would feel like a 10:30 p.m. game.” 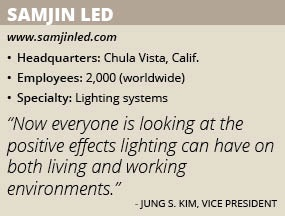 At the recommendation of a consultant, the Mariners installed Samjin’s controllable lighting in the locker room. For evening games, pre-game lighting was set to daylight while post-game lighting was adjusted to an evening setting.

In other applications, human-centric lighting has been installed in hospital rooms – brighter for examinations and reading charts and lower to encourage patients to rest.

But the concept has gotten attention in less expected places, too.

“A lot of casino industry people have approached us about their back-office areas,” Kim says. “They want to create a daily light cycle so people don’t feel like they are stuck in the same time for the entire shift. It causes them to fall asleep or be less alert.”

Variable lighting is also being considered in the classroom. “For example, in a biology class,” Kim says. “Most of the time you want students to be focused on the teacher and the back of the room should have a different light setting than the front [to emphasize the teacher]. At other times, when students are doing lab work, the lighting should be task oriented and individualized.”

More broadly, Kim says there is discussion about how lighting can be used in the classroom to help focus younger children on a particular task or calm them down during a certain time of day.

The U.S. subsidiary that Kim heads is focused on lighting for numerous situations including ambient, indoor, outdoor, commercial, industrial, warehouse and other uses.

“Lighting is a very fragmented and market-specific industry,” Kim says. “It’s very different from windows or concrete. It’s probably closer to an appliance or personal electronics type of space.”

Offices, for example, typically have 2×2- or 2×4-foot-grid lighting with alternating ceiling tiles. “It might be completely different [lighting] if it’s a retail store versus an indoor parking garage versus a UPS sorting facility,” Kim says. “Even within outdoor lighting, there are many fragments: highway road lighting versus parking lot lighting versus exterior wall lighting. It’s virtually impossible for one building to have need for only one type of light.”

Maturing Technology
“Prior to LED generation of lighting, there weren’t many controllable features due to the nature of bulbs or tubes,” Kim says. “It was either on or off. People started fiddling with the concept of dimmable lighting. Think of the LED generation as enabling complete controllability. You can brighten or dim at one percent intervals.”

“Most people think of garage lighting as one dimly lit bulb for when they enter the space. It’s probably the place you want the most intense blue light so you can pick out features. You probably want the garage to look like a typical industrial space where visual acuity is most important.”

Initially, when light emitting diodes – better known as LEDs – were introduced, everyone thought about reducing the cost of energy. LED lights use less electricity to produce the same amount of light compared to older-technology bulbs.

“Now that LED has matured, the conservation [of electricity] aspect is taken as a given,” Kim says. “Instead of being electricity consumers, we have now become productivity enhancers. It’s the biggest trend in the last five years. No one talks about how many kilowatt-hours you can save. Now everyone is looking at the positive effects it can have on both living and work environments.

And that is the focus of Samjin LED. Researchers at Samjin work to minimize glare and shadows, customize or optimize positioning, improve ease of installation, increase product longevity and even about how to utilize the full light spectrum.

R&D Efforts
The Samjin’s R&D group works out of South Korea although it is involved with many end-users in the United States.

“Samjin’s original background is in injection molding,” Kim says. “That bodes particularly well in the packaging of the product. One of our best-selling lights is for warehouses and industrial spaces. It’s not your typical multi-piece vapor-tight design with multiple clamps. It’s a single-injected tubular construction with end caps that make it inherently vapor-tight. It’s designed to be water proof, dust proof, insect proof and so forth.”

“In that environment, lights can’t have a harsh glare, can’t have dust accumulation and can’t require maintenance,” Kim says.

Workplace Trends
“The modern trend is to build under-cabinet [office] lighting so the desk surface is brighter than the rest of the space,” Kim says. “You can’t have ceiling lights too bright or it casts harsher shadows. All our lights must be glare minimized. Brightness is only important to a certain level. You don’t want to be shielding your eyes because you have the wrong type of lights above you.”

When it comes to office lighting, preferences vary, Kim says.

“Smart lighting can make a lot of sense,” he says. “Every office and meeting room can have its own preferred setting.”

Take call centers, particularly ones that operate 24 hours a day. “The one thing workers can have control over is the lighting environment,” Kim says. “Workers like having the light levels change during the day. Blue in the morning to orange in the evening. It can be reversed for the night shift with sunrise at 6 p.m. and sunset at 6 a.m.”

In an office building, smart lighting can be controlled at a central panel. It can also be integrated with motion detectors in a building. “During work hours, you don’t want lights to go on and off,” Kim says. “After work hours, when there are few or no workers, in what we call ‘janitor mode,’ you want the lights to come on when there is motion and maybe a minute or two afterward. Odds are it is someone passing through or emptying a garbage can.

In a residential setting, smart lighting may be controlled remotely by a smartphone or other smart device.

User Preconceptions
“People have grown up with a prejudice or specific notions of what lighting should be, like a round bulb or a rectangular multi-tube box,” Kim says. “They can’t get away from that visual concept.”

Take, for example, traditional fluorescent lights. “Tubes used to be a necessary evil [to hold fluorescent gas],” Kim says. “No one mandated that all lights should look like a tube. In our early years, customers used to think there should be tubes in our light fixtures. One of our best-selling products is a square or rectangular sheet of light, like a computer screen. Customer would say, there must be a bulb or tube you can change. My answer is when was the last time you changed a light source or LED package in your computer or cell phone? You don’t. You replace the whole thing.”

A typical LED light lasts about 10 years if it’s used 24 hours a day. For a typical office that lifespan extends to about 20 years and for residential usage about 30 to 40 years. “The next time you replace the lights is when you are doing a remodel or retrofit of the space,” Kim says.

Still, even those who should know better about the importance of effective lighting frequently don’t. Kim mentions a big-box chain that uses huge lampshade-shaped lights on a high ceiling. “The majority of its light are in the upper half of the building,” Kim says. “I don’t know why they want to show off the bare ceiling. What they should really want is floor and counter-level lighting for the shelves to be optimally lighted.”

Going Outside
Samjin LED is expanding its outdoor segment to include lighting for roadways, streetlights and outdoor security. It even is moving into explosion-proof lights for oil refineries and chemical plants where the lights have to remain on even during catastrophic accidents.

Samjin LED researchers are also designing solar-powered lights, which could be used for outdoor lighting in subtropical regions of the world. The challenge is in developing batteries to store electricity during the day, a challenge that has lessened somewhat in recent years. “The storage battery is the heaviest cost component,” Kim says. “Now, with LED lights being much more efficient, that requirement is smaller. Each unit needs to store less electricity to operate through the entire night until following morning.”

These types of synergistic technology advancement is accelerating wider adoption of LED lighting, Kim says. Samjin LED’s aim is to incorporate these advancements in the most user-friendly fashion.

The overall trend is for lighting to move away from being a commodity item. “Just like all things electronic, lights are entering into the realm of personalization and differentiation,” Kim says. “As a pioneer in human-centric lighting, we think lighting products should be less about light source and more about lighting – lighting for the people, not just buildings.