Pankow Builders is close to finishing the Metropolis Tower 3 in downtown Los Angeles after a five-year joint-venture project.

The roots of the Metropolis project in downtown Los Angeles reach back to the late 1980s with developers who promised a city within a city concept, according to real estate website Curbed. After an international competition to design the project, IDS Real Estate Group bought the 6.3-acre site.

IDS took it through the approval process but then decided to sell. Greenland USA, the U.S. arm of Greenland Group of Shanghai, China, bought the property in July 2013 for about $150 million. The Metropolis project was Greenland Groups’ first foray into the U.S. real estate market.

“The advantage to the property was that it was already entitled via the previous owners’ efforts,” Greenland USA Director of Construction Peter Demuth says. “We didn’t have to go through years of effort. That’s what it takes in California for something this large.”

In 2013, the economy was beginning to recover from the Great Recession. “Everyone was starting to return to the downtown core of Los Angeles and we had kind of reached a tipping point with urbanization,” Demuth says. “Moving further out to have people commute to work in the city center – it had reached a point where it was unfeasible. There was increasing interest in the center of the city. It was probably a stronger cycle of downtown development since almost any previous business cycle in terms of the number of major projects.” 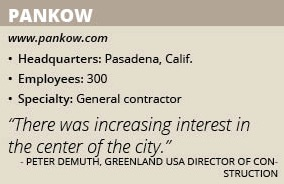 Location is everything, and the 6.3-acre Metropolis site is strategically located at Francisco and Eighth streets near two freeway entrances, the Staples Center, Los Angeles Convention Center and the financial district.

The project was done in two phases. Phase one was the 350-room Hotel Indigo and Tower 1, a 38-story, 308-condominium building.

Greenland USA has signed letters of intent with several retail tenants and is looking to get a “good-sized restaurant” tenant as well.

Metropolis Tower 3 is being built by joint partnership of Charles Pankow Builders of Pasadena and PENTA Building Group of Las Vegas, with Pankow being the managing partner. The partnership is building only the single tower.

Pankow is a large mid-sized firm that is a pioneer in design/build and is a founding member of the Design-Build Institute of America. In addition to general contracting services, both contractors are experienced at complex projects and both self-performed portions of the work, most notably structural concrete.

The two firms combined staffs and worked as a single entity. “We are very similar companies as far as size and approach to doing the work,” Pankow Project Executive Rick Schutter says. “Our cultures are pretty well aligned. Another benefit from partnering is we were able to learn from each other and share best practices.”

Schutter adds that “PENTA also brought some subcontractors and vendors from Las Vegas and that helped to expand the subcontractor and vendor pool for the project. Probably Pankow or PENTA could have attempted to do the project by themselves but it would have taken a lot of resources in a busy market.”

That’s important. It is a busy time in Los Angeles with construction underway on a new football stadium in Inglewood for the Los Angeles Rams, construction continuing for the 2028 summer Olympics and other ongoing private and public projects.

Pankow got involved in the Metropolis development in late 2014 in its first project for Greenland USA. The company started pre-construction in early 2015 and actual construction in July 2015. Pankow has worked on high-rises in Hawaii and northern California, and done projects of 1 million square feet. However, Metropolis Tower 3 at 56 stories is the tallest building Pankow has ever worked on, beating its previous record of 40 stories.

Tower 3 is a huge project involving 60 subcontractors and vendors. At the peak of construction, Tower 3 had more than 400 field workers on-site. Pankow began hiring subcontractors early, as the Los Angeles construction market is busy.

Pankow, known for its expertise with concrete, had its work cut out. Both the frame and structure of Tower 3 are made from concrete. Pankow had to import aggregate from Canada to use in the concrete.

That imported aggregate is harder than the rocks normally mixed with concrete. “We had to do special trial mixes of concrete and get them approved by the structural engineer of record,” Schutter says. That was to minimize any sagging in the floors and ceiling and prevent deflection.

For the exterior of Tower 3, Pankow imported prefabricated curtain wall from Chinese firm Yuanda. In all, it installed about 10,000 curtain wall panels that were four to five feet wide and 10 feet tall. Schutter was initially concerned, having never worked with the company before, but says Yuanda’s quality control is excellent and installing the curtain wall panels “was one of the smoothest parts of the entire project.”

For pouring concrete floors, Pankow used a pre-built flying formwork of about 50 by 20 feet that allowed it to proceed in a step-wise manner. “The form gets hoisted up with a crane to be set up on the next deck,” Schutter says. “We used them floor after floor.”

The Project Next Door

While lean construction techniques are frequently done at the project manager and engineering level, Pankow decided to do something different. “We drove this all the way down to the field crews,” Schutter reports. “On concrete work, we trained our field crews with basic info of lean construction and identifying waste and empowered them to come up with ideas to make the work more efficient.”

It worked well. “They would come up with their own innovations and implement them almost in real time,” Schutter says. “It usually made it not only more efficient but safer.”

While Pankow/PENTA was building Tower 3, another general contractor was building Tower 2, with which it shared firelights, fire sprinkler, electrical and other systems. “This required additional coordination on our side and their side – scheduling of major activities, logistics planning, defining the scope of work of what might have been gray areas,” Schutter describes. “They had to have charts of our project that connected to their project since their project finished earlier and they wanted to get occupancy for their tower. There was good communication between the two of us and we were able to work out the little challenges.”

Pankow took a variety of measures to ensure its workers remained safe. All employees have to go through a detailed safety orientation before setting foot on the site. When they complete the orientation, they are issued a sticker for their hardhat. Anyone who tries to get on the site and doesn’t have a sticker gets turned away.

There were daily safety huddles either for the entire workforce at once or multiple huddles throughout the building. There were several full-time safety managers to observe and work with subcontractors. Each crew filled out job-hazard assessments before doing high-risk work. Electrical work was locked out and tagged out once completed.

For Tower 3, Pankow also focused on fall protection so no object could blow off or be dropped from the building. That included setting up nets.

As with lean construction, field workers were empowered to stop work if they saw anything they thought was unsafe.

In early 2018, Greenland USA put Tower 3 and the hotel up for sale. Demuth explains that originally a portion of the buyers was expected to be Chinese citizens who wanted a second home in California.

However, “The Chinese government changed the rules by which you could move money out of the country,” Demuth says. “That also impacted the ability of Greenland Group to bring cash across the water. The financing was coming from headquarters. Midstream, they had to go out and shop for a loan [in the United States], which is much more difficult.”

Greenland succeeded in gaining a $310 million loan from Cottonwood Group and Natixis but at the time Greenland wanted another option.

“We were shopping for a loan and hadn’t secured one yet and [selling] was viewed as an alternative,” Demuth says. “Tower 3 and the hotel are not for sale right now.”

While construction never stopped, it did slow while Greenland sought financing. During that time, Greenland decided to increase the quality with high-grade appliances and more upscale finishes such as more stone counters and higher-quality wood. Greenland also decided to reduce the total number of units. Originally intended to be 736 condominiums, some studios and one-bedroom units were combined and the total number of units decreased to 685.

In April, Demuth described condominium sales on Tower 2 as steady and expects to sell 50 percent of units before Tower 3 is completed. “If the rules hadn’t changed [in China], we probably would be sold out now,” Demuth says.

Tower 3 was Pankow’s first joint venture in quite a while. “They can be successful given the right partner,” Schutter says. “PENTA had done more joint ventures than we had done and they brought in lessons on joint ventures.”

Greenland Group, based in Shanghai, made major decisions regarding the Metropolis project including Tower 3. “Their culture is a little different than ours and they might ask for different things such as different cost data information,” Schutter notes.

For example, Greenland Group requested dollars per pound of steel information, which is a metric not typically used in U.S. construction. “We learned the sooner we understood and embraced the information they were looking for, the better we were going to be,” Schutter says.

As of April, the project is about 85 percent finished with completion scheduled for November. There is a crew already working on punch list tasks.

“It’s going well,” Schutter says. “The quality is coming out well. We are starting work on the recreation areas and amenities. Six months from now we will be finished with almost all of the construction. The last couple of months will be for testing and construction.”