Mid-Coast Transit Constructors (MCTC), a joint venture of Stacy and Witbeck, Herzog Construction Corp. and Skanska, is about 60 percent completed with the Mid-Coast Corridor Transit Project in San Diego. The three leading civil construction firms in the nation have entered phase two of the project, which includes the construction of track systems and trolley stations.

“The phasing of the project first entailed all the civil work, which includes earthwork, structures and retaining walls, and now we are transitioning to track, systems and stations,” Deputy Project Manager Eric Meisgeier explains. “We are a fully integrated joint venture, so no one firm has taken the lead in one phase or the other.” 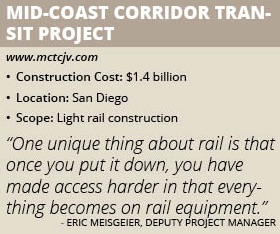 The three companies that make up the joint venture have built more than 30 rail projects including 600 miles of tracks combined over the past 10 years. The total value of the projects built by the three is more than $4.7 billion.

Stacy and Witbeck is a builder of light rail, commuter rail and streetcar systems across the United States. Herzog is similarly experienced in building streetcar, light rail transit, commuter rail and freight systems, particularly in San Diego. Skanska’s Riverside, Calif., office provides its heavy infrastructure knowledge as well as equipment to the project. The company is a world-leading project management and construction group.

The years of rail experience the three companies bring to the Mid-Coast Corridor Transit Project will be invaluable during this second phase because once the rail gets put down, the site logistics completely change. “One unique thing about rail is that once you put it down, you have made access harder in that everything becomes on rail equipment,” Meisgeier says. “You can’t just pull up a truck where you need it, you are confined to where that track is, and you have greater logistical challenges moving people and coordinating subcontractors to make sure they can get from point A to point B.”

To combat this upcoming challenge, MCTC will designate areas of the job for exclusive use to specific crews or subcontractors for a certain period of time. Close coordination has been key to the success of the Mid-Coast Corridor Transit Project so far, and Meisgeier says laying the rail is just adding one more element.

The joint venture was hired during the design phase, but unlike design/build, it was not responsible for the design. “We were brought on in September 2014 to help with constructability reviews and to provide realistic schedules and budgets,” Meisgeier explains. “Constructability reviews are not just about cost, but phasing, material procurement and trying to improve the overall schedule. We provided a year-and-a-half of preconstruction services that included scheduling, designing, negotiating prices and holding constructability meetings, before we moved into the construction phase.”

The CM/GC method is new for projects in California. The Mid-Coast Corridor Transit Project is the first San Diego Association of Governments (SANDAG) project to be delivered using this method. By using this method, MCTC provides feedback every step of the way. “We started out co-located with the owner and designers because there has to be a lot of trust between everyone. This is a $1.4 billion construction project,” Meisgeier says. “We have really open and frank conversations, and there are certainly issues and disagreements but because of the procurement method we are able to work through it and it’s a truly collaborative process.”

The GM/GC method is different and takes open-mindedness, but “to the owner’s credit, almost everyone the project within their organization has bought in and the challenges we have overcome without impacting the project,” Meisgeier adds. “I have a high level of confidence SANDAG would agree the project has been successful and procurement has been a big part of that.”

The Mid-Coast Corridor Transit Project includes approximately four miles of system upgrades to existing tracks between the Santa Fe Depot and the Old Town Transit Center, and 11 miles of new tracks between the Old Town Transit Center to University City. The neighborhood, considered San Diego’s “second downtown,” is a densely populated residential and commercial district that includes the University of California San Diego and the Westfield UTC shopping center. The area is currently not served by regional public transit services.

Freeways and local roads located in the existing traffic corridor between University City and downtown San Diego – dubbed the Mid-Coast Corridor – are typically crowded. Population in the area is forecasted to increase 19 percent and employment is expected to increase by 12 percent before 2030, according to SANDAG. SANDAG is providing half of the funding for the project, with the other half secured through a federal grant.

After the project is completed in late 2021 or first quarter 2022, SANDAG will turn the Blue Line trolley extension over to the San Diego Metropolitan Transit System, which will operate the line. The extension will include nine new stations, five of which are located in University City. The remaining stations will be located between the University City and downtown areas, including one existing station in the city’s historic Old Town district.

Today, MCTC is running at peak with 400 craft, 150 staff and a couple hundred subcontractor personnel on site at any given time. In addition, the owner has about 100 people on site. “We are approaching 1,000 people on site on any given day,” Meisgeier says. “From my point of view, my biggest challenge is logistics, communication and making sure everyone has timely information and there’s a level of confidence everyone is working from the same sheet of music, so to speak.”

Although MCTC has its own quality control managers on staff, all the techs and field inspections are performed by consultants, and Twining Inc. is the joint venture’s go-to contractor. “They are doing a great job and supporting us,” Meisgeier says. “There is lots of night work and weekend work, as you can imagine on a job this size, so our needs fluctuate on getting techs out and they have been supportive in getting us the help we need.”

Based in Long Beach, Calif., Twining Inc. employs materials engineers and experts who have a true understanding of construction materials and their application in the field. “This is really an awesome project to be part of, it’s literally changing the landscape of public transportation in San Diego,” says Andrew Suarez, San Diego branch manager for Twining. “Every day, over 300 people are working in harmony to complete San Diego’s largest construction project to date, and we couldn’t be happier to be working side by side all of them. I know that our team is extremely proud to ensure the quality of work for all of those building the project and future users, as well. Once this is complete, it will be a real feather in our cap.”

MCTC boasts an excellence safety record on the Mid-Coast Corridor Transit Project, crediting its field supervisors and excellent craft personnel who have bought into its safety program. “We are working alongside an active railroad for seven miles of the project and there are 60 trains per day that come through our job site going up to 70 mph,” Meisgeier says. “Constant coordination with the railroad, flaggers and all types of safety protocol is in place to make sure that their trains and our people and equipment are kept separate.”

After MCTC completes the track systems and stations, the next big challenge will be to complete testing that is required to put any new light rail system or extension into service. “We probably have six months’ worth of testing and then we will turn over the track to the owner and they’ll perform another three to six months of testing to make sure all fail safe systems and signals work and are safe. Once the safety certification process is completed, service is anticipated at the end of 2021 or first quarter 2022.”