For Howland Green Homes, its mission is simple, yet revolutionary, and that is to create buildings that produce more energy than they require

At Howland Green Homes (Howland Green), the aim of the business is not just to build homes, but positive energy developments. By this it means, creating homes, buildings and communities that are so efficient that they produce more energy than they consume. This marks the business out as representing the next step towards greater sustainability, as it looks to build beyond the ‘Net Zero’ standard and into ‘Net Positive’ territory.

Leading this push is one Dave de Sylva, President of Howland Green. “I have been in the business of building and development for 49 years now, previously operating a company called Del Ridge Homes Inc. (“Del Ridge”), which is known for 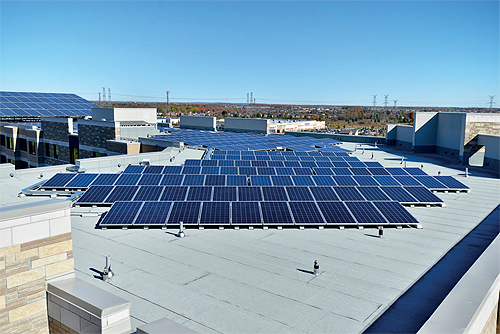 its popular GreenLife brand (“GreenLife”),” he details. “Whereas this company operated with a goal of creating Net Zero buildings, Howland Green is all about being ‘Beyond Net Zero’.”

For Howland Green, this means utilizing even more insulation, applying greater technology in conservation, sharing advanced energy practices that result in even lower operating energies, and achieving lower operating costs. “We build commercial office buildings and residential condominium buildings, and with both we have a unique building system that we try to make improvements to with each new project,” Dave explains. “All aspects of the system are geared towards energy conservation. Whether that means building the box out properly, or heating and cooling it effectively, it is about reducing the amount of operational energy required so that your bottom line comes out an awful lot lower than the average building.”

In a further positive move, Howland Green then looks to satisfy those lower energy needs with renewable energy. It generates off site solar on nearly every building which, when combined with the on-site photo voltaic system that it has become adept at utilizing, exceeds all demands generated by the building, allowing the company to give back its excess, clean, pollution-free energy to the local community.

The success of Howland Green – and GreenLife before it – can in part be credited to Dave’s love of science and passion for problem solving. “I am one of those individuals who never stops thinking and looking at different ways of doing things,” Dave continues. “Science is so interesting because it talks to you, it responds to what you do with it, and rather than sit back on things that have already been done before, I enjoy experimenting and I don’t think that is something that should be feared.

“As builders and developers, we take a piece of land and what we put there evolves over time, but more often than not our industry doesn’t really want to study how that land or construction behaves. A key part of science is data collection, and having the ability to collect data from that development, analyze it and manipulate it is so important as it allows us to learn from what we have done in the past to create a better future. I think that thought process is missing all too often with people more fixated on past accomplishments.”

Howland Green’s own experiments with data, technology and various construction processes have led to it adopting a number of specialist techniques that it has incorporated into its Building Envelop, which make its projects so sustainable. This includes the use of upgraded insulated concrete forms (ICF). The company has invested in custom made ICF, which increases the walls from 2-to-5/8’’ of expanded polystyrene insulation (EPS) on each side, to over 4’’. “A major benefit of having an enhanced ICF system is that your demand for space conditioning – heating and cooling – is so much smaller, often almost ten per cent of the norm,” Dave enthuses.

Arguably the company’s flagship development today is its Howland Green Business Centre, one of the first and only net positive energy office building in Canada. Standing three storys tall, offering over 59,000-square feet of office space, and powered by solar and geothermal energy, it is a true revolutionary landmark achievement. In addition to producing more clean energy than it uses each year, the building has been constructed to include individual geothermal heating and cooling controls, it harnesses all rainwater and recycles it on site, possesses 360,000 watts of photovoltaic panels, and stores energy for later usage using high-tech battery and pneumatic systems.

“The Howland Green Business Centre is a terrific example of our pioneering work, that people are amazed by every time they hear about it or visit,” Dave proudly states. “Just to give you an example of its environmental credentials, it is February as I speak, and the furnace here has yet to come on once this year! Thanks to features like our enhanced ICF, pre-cast floors and terrific triple glazed windows, heat doesn’t escape and the building’s temperature stays constant virtually all-year round. There is so much stuff also that you cannot see, little elements and features throughout the building, so we are looking forward to collecting all of the data for a full-year’s operation later in 2021, so as to really highlight the benefits that the center has – and can – deliver.” 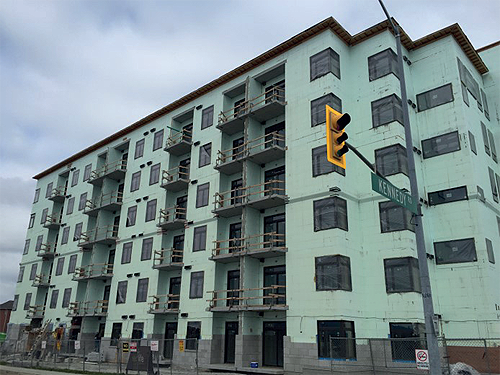 On the residential side of the business, Howland Green’s major undertaking at present is its work on Milton’s Bront West, a new condominium development spanning some 190,000-square feet in Milton, Ontario, Canada. Here, more than 16 different energy features combine to create a fully sustainable, eco-friendly, waste conscious condo experience. Ranging from 1078-square feet to 1607-square feet, these two and three bedroom suites feature open concept living, with luxury finishes throughout. “Milton’s Bront West utilizes much – if not all – of the same technological features that have gone into create the Howland Green Business Centre, albeit over a larger, more spread out space,” Dave adds. “I have taken the experience that I had in successfully delivering condominiums under the GreenLife banner for Del Ridge, and combined it with technology such as our enhanced ICF that is being used in such applications for the first time ever, and the results so far have been excellent.”

Looking back on the success of the business over the past 12 months – and indeed beyond that – Dave pinpoints its ability to adapt to the world around it, as well as the efforts of its people, as being fundamental. “One thing that sets us humans apart from the animal kingdom is our ability to adapt, and we as an organization are constantly evolving, because we know that standing still is simply not the answer,” he professes. “As far as our people are concerned, we are not a huge company in terms of numbers, but some of those working alongside me have done so for 20, 25, even 35 years now. The reason why is because they – like their colleagues – believe in what we are, and are thrilled to be a part of what we are achieving here at Howland Green.”

For 2021, the focus of the company is initially to complete its work on Milton Bront West. In the meantime, it is currently at the drafting board stage of a new office building project, and has its sights set on a follow-up residential build. Needless to say, then, that Dave and his team have no intentions of slowing down for the foreseeable future.

Longer term, Dave’s attention is also fixed on identifying other firsts that the company can achieve. “As far as our mission or goals for the future are concerned, it goes back to that thought process of leaving no stone unturned when we set out to accomplish something,” he declares, before revealing one of the ambitions he would like to achieve. “One of the biggest things I would like to see us do is come up with an in-built system for the storage of a percentage of the energy that falls onto our planet each day. I know that there are a number of techniques being explored today to try and make such a solution possible, and while I don’t know if one of these will show it can be done within a building itself, my instinct tells me that there has to be a way, and I am more than happy to explore such a theory to see if it can become a reality.”

In fairness, given the track record that Dave has had delivering industry firsts while operating Del Ridge and now Howland Green, you would perhaps be unwise to bet against the above coming to life sooner than later.