Fusco Construction embeds itself into the communities it serves to deliver state-of-the-art schools for modern learning.

Over the last 95 years and under three generations of family leadership, Fusco Construction has remained agile in meeting the evolving needs of its clients and the market place. Fusco’s portfolio includes landmark projects such as the Yale University Baseball Stadium, the Ct. Tennis Center, Shubert Theater, Continental Can World Headquarters and the Yale New Haven Hospital Clinical Laboratory.

In addition to its high-profile projects, education is a specialty focus for the New Haven, Conn.-based company. “One of the things that has led to our success is the relationships we build with our clients,” Marketing Director Nancy Bauer says. “We recently completed Charter Oak International Academy in West Hartford, Conn., and have continued our relationship with them.  We visit the school often and have helped them launch a variety of enrichment programs for their students including Building Readers, a literacy program for their preschoolers, and performing arts programs for their 2nd and 3rd graders.”

In its most recent partnership with Francis Walsh Intermediate School in Branford, Conn., Fusco is not only overseeing the construction of its $88.2 million renovation and expansion project but has also been welcomed into the school community with invitations to participate in programs at Branford High School as well as the middle school. Most recently they were tapped to participate in the high school’s Women in Engineering & Construction program. “Our team created a test lab in their library where 60 students came in and participated as project managers and Superintendents for the day.  They were setting up submittals and RFI’s, learning about product and materials selections and were able to get a true understanding of what’s involved in the building of the Town’s new Middle School.” 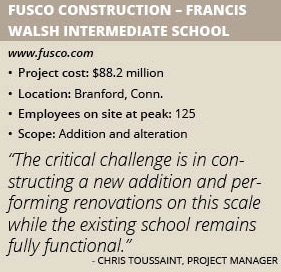 Francis Walsh Intermediate School was originally constructed in 1972 with approximately 191,000 square feet on 29 acres. This phased, renovation and expansion project encompasses demolition of an existing wing, addition of a new 116,000 square foot academic building and renovation of the existing facility to serve as a 53,000 square foot commons building. This renovated and repurposed space will house the schools’ administration offices, the nursing and healthcare offices, along with shared athletic facilities, including the natatorium and auditorium.

The new, three-story academic building will include shared classrooms, art classrooms, a family consumer science classroom, specialized instructional spaces for special education, and the Board of Education Offices. The addition’s first floor will also include the cafeteria, kitchen and service space for the technology workshop and storage.

Like many school projects Fusco has built, the Francis Walsh Intermediate School will remain occupied and fully functional during construction. “Safety is a top priority for us on any job, but it takes on a whole new meaning when working on a project of this size and scope on an occupied school campus,” notes Project Manager Chris Toussaint.

“We implement very strict safety protocols that are enforced on a daily basis to ensure the safety of students, teachers and visitors. We also work out a very detailed logistics plan putting in temporary driveways, reconstructed bus loops and parent drop off and pick up areas to keep everyone safe. There is a lot of prep work to ensure the construction activities won’t impact the daily routine,” Says Toussaint. “We want to minimize any interruption to the school’s activities and educational process. Communication with the school staff and the town is critical to our success and that happens at all levels every day.”

Weathering the Storm and Staying on Course

Every project has its unique challenges and Francis Walsh is no exception. Being a phased, occupied renovation, the new addition schedule calls for completion and occupancy by January 2020 when the students return from winter break.  “While it is more typical to complete a school project at the end of a summer, at Walsh the students and faculty will arrive and start a new year with a new school. With the polar vortex impacting Connecticut through March, followed by an April with above average rainfall, Mother Nature kept us on our toes. We worked closely with our concrete contractor and other members of our field team to do what was necessary to put the work in place and maintain the schedule,” says Toussaint.

Toussaint collaborates with all of the subcontractors on the master schedule to ensure everyone is on same page.  “I bring in the subs, get their input and feedback and work with them to drive the schedule. If they need an adjustment we work as a team to find a workable solution,” he says.

Phase II will begin in January 2020, which requires a large amount of demolition to the interior of the existing building. When the school was built, it was designed as an open concept layout with hardly any interior walls. One of the challenges will be working with the existing building that was built using space framing, which allows for less interior columns to create wide open areas. The challenge is to thread and needle mechanical systems through it, supporting it using new structural steel,” Toussaint explains. “This will be an entirely different layout that will transform it into a more modern21st century learning environment.”

When the project is complete, each classroom will have a learning wall rather than a traditional white board. A special coating is applied to the wall so the whole space can act as a white board. A three-story grand staircase will also be included in the new building that will serve as a flexible gathering space, a notable project feature. The new addition will also house the town’s new Board of Education central office, an office area of some 5,100 square feet of the total 189,000 square feet of the newly renovated and expanded Francis Walsh facility.

Fusco looks forward to continuing its ongoing relationship with Francis Walsh Intermediate School community as well as the town representatives who are guiding its progress.