With its knowledge of lean methods, Clark Construction Co. helped to deliver a successful project to an excited MSU campus.

When Clark Construction Co. began its work on the Michigan State University (MSU) Broad College of Business Edward J. Minskoff Pavilion, the company knew it would be a unique project and it was well prepared in a number of ways. Not only had Clark worked with MSU before, but it comes to work with “a design-assist, preconstruction-type of mentality” in terms of the delivery of a project, according to Project Manager Nick Henne. This was exactly the type of approach the MSU project required, because it equipped the team to face the challenges it encountered.

“We have a good relationship with MSU and it was great that they had us in the driver’s seat for this one,” Henne says. “We meshed really well with the team that was put together, and it’s a big thing to keep those relationships throughout the project and beyond. We were in the design process for two years, so we all knew each other so well that we were able to hit the ground running.”

When it opens this fall, the state-of-the-art Minskoff Pavilion will cover 108,000 square feet in its three-story structure. It will include classrooms, teaching labs, program offices, career 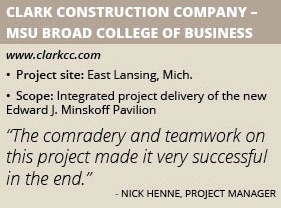 management offices, interview facilities, student interaction spaces, multi-purpose spaces, cafe and a variety of amenity spaces. MSU wanted a new structure for the Broad College to attract top-rated students and faculty, integrate with the existing business complex to create a unified space and create an iconic entrance for the Broad College.

The project has been unique, Henne explains, because it was an integrated project delivery (IPD) contract with heavy design/assist. This was MSU’s first major IPD project, although it had used IPD on a small renovation at Shaw Hall on its campus a couple of years ago. Clark signed the contract with the owner and architect, who put their profits at risk throughout the project. Clark ended up being in the design process for two years, but onboarded its team early to get as much input as possible. This was the company’s first IPD project using the ConsensusDOCS 300 series, but Henne notes this helped foster open communication and collaboration throughout the project.

“It was very intense with communication upfront; MSU spent $7 million in preconstruction, which was the most they’ve ever spent for new construction scope,” he says. “With architectural consultant FTC&H and LMN, us and our trade partners, it was like a learn-as-we-go scenario. We had 61 RFIs, but typically on a job this size we have 1,000 to 1,400 RFIs. Part of the IPD agreement was to find ways to be lean and more efficient, because there’s often waste with RFIs and the submittal process, and each RFI could roughly cost $2,000 to the owner.

“We had multiple meetings weekly to sort through issues using the PlanGrid software and to track, assign and prioritize tasks,” he adds. “The meetings were frequent based on what we were encountering. But with the trade partners involved early along with the lead designers and engineers, we incurred minimal costs compared to a normal setup.”

Not only did Clark Construction save in preconstruction costs on the project, but it finished the work and received the certificate of occupancy in early June, which was three weeks early. This is major, considering the project team also had a two-month delay at the start of the project with abatement issues, as well as a rough winter that caused delays. Henne notes it helped that Clark was able to hand-pick its team, but Clark also helped the project save in other ways.

“With MSU, typically on a $62 million job, they won’t sign a contract or give approval for the work to begin without a 10 percent contingency in place,” he says. “The owner had $1.6 million and the IPD contingency was just under $1.5 million, so we protected our risk pool partners’ profits. We had to be lean on this one.”

Clark has a lot of experience on how to be lean, so this knowledge helped drive the project’s success. “The excitement this project has drawn has been great,” Henne says. “It’s been a contagious excitement since we started, and MSU has been a great owner and great to work with. That made it very enjoyable. On some projects, you build a building and it sits vacant until someone moves in. Here, they move in the next day and that really made it enjoyable. The comradery and teamwork on this project made it very successful in the end.”

Clark Construction Co. Project Manager Nick Henne says its recent work at Michigan State University was successful, in part, because Clark was able to hand-pick its team. These are the firms Clark was proud to work with: