Skip to content
You are here:Home » An approach to consider
Equipment Projects Features 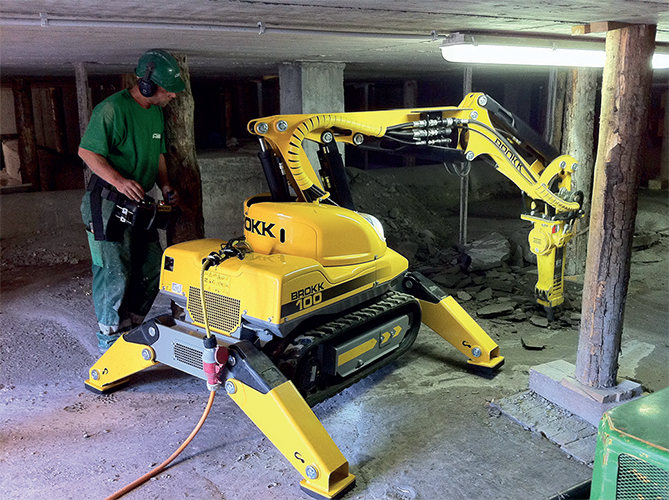 Demolition, like every industry, is constantly evolving. To keep ahead of the curve, contractors seek out the machines and methods that increase productivity while decreasing the physical toll on workers.

Concrete sawing is viable option for fast, effective removal. However, savvy contractors are finding that adding remote-control demolition robots to their sawing operation not only increases productivity and safety, but also allows them to reduce bid prices and maximize profits. Here’s how:

1. Faster turnaround
Take a wall sawing job, for example. To remove a 10-by-3-meter wall in a confined space with a saw requires, on average, 25 cuts. Depending on depth, this might take several passes. Once cut, the concrete blocks need to be broken down for easier removal. The whole process would take at least four days with two saws and require a crew of at least three — two to run the saws and at least one more to handle removal. 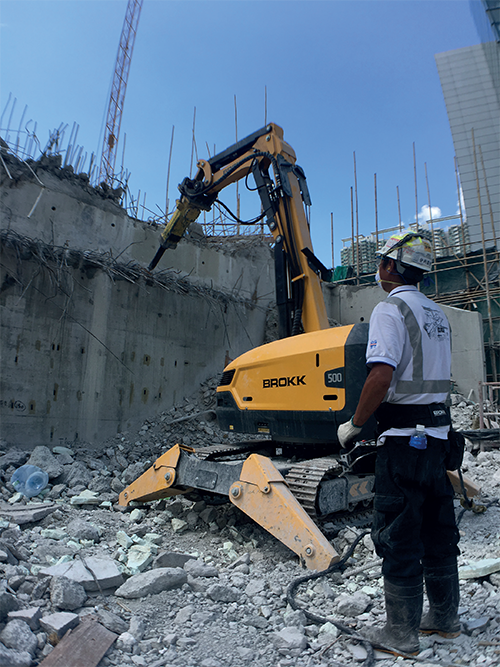 Using a remote-control demolition robot can cut the time in half. Rates vary based on machine, material and depth, but demolition robots are capable of extraordinary productivity — up to four cubic-meters per hour in some cases. To remove the same 10-by-3-meter wall, the contractor would still require perimeter cuts to avoid transferring vibration to surrounding structures. After that, though, the demolition robot and a single operator could quickly and effectively break up the concrete into small pieces that are easily cleaned up with a skid-steer loader.

Bank Vaults and other heavily reinforced concrete removal applications are another area where a demolition robot can reduce removal time by more than half. The robot works its way across the surface, exposing the rebar for cutting with a torch. This method greatly reduces diamond costs from standard methods such as core drilling, wire sawing, and wall sawing.

Additionally, demolition robots reduce the need for scaffolding on larger vertical demolition projects since some models can reach up to five meters (16.4 feet). This can save up to a week before and after the project, allowing contractors to take on more revenue-producing jobs instead.

Perhaps the biggest safety advantage, though, is limiting the human element in the more manual aspects of concrete cutting. Using a demolition robot minimizes the need for handheld saws, coring equipment or pneumatic breakers. Working with these machines, some of which can weigh 18 kilograms (40 pounds) or more, can easily fatigue workers and the vibrations can lead to long-term injuries. Robotic demolition also creates more manageable rubble that is easily lifted and removed, further reducing strain on workers.

3. Improved versatility
Attachments can further increase safety and productivity. A crusher attachment, for example, is quieter than a saw or handheld pneumatic devices and breakers, making the jobsite safer for workers and the public. It also opens up new opportunities in areas where saws would be too noisy — such as near hospitals or schools. Not to mention making waste disposal easier by separating concrete and rebar onsite.

The possibilities go beyond concrete cutting, as well. In addition to crushers and breakers, leading remote-control demolition robot manufacturers offer a range of attachments for cutting pipes, taking down stud walls, sorting debris, digging, and even vacuum lifting slabs. A demolition robot with the right array of attachments can not only increase productivity, but also limit the need for additional support equipment on congested jobsites.

What it comes down to
Concrete sawing contractors who supplement their operation with remote-control demolition robots can do jobs faster, safer, and with less overhead. It’s that simple. What used to take a week with a large crew can now be done in just a few days with a small crew and a single machine. Once the first job is done, they can quickly move on to the next, doubling their productivity. Labor and diamond savings add up, as does the profit margin with each extra job they can take on. Not to mention the savings from a healthy, happy workforce.

Demolition robots won’t replace concrete sawing, but as part of a versatile operation, they can easily open up doors — or bank vaults — to increased profits.

Jeff Keeling is the North American sales & marketing manager for Brokk Inc. Brokk has been the world’s leading manufacturer of remote-controlled demolition machines and attachments for 45 years. Through continuous innovation in engineering and design, Brokk is able to offer unique solutions to multiple industries worldwide, including construction, demolition, mining and tunneling, cement and metal processing, nuclear and other specialty applications.
www.brokk.com