Skip to content
You are here:Home » An affordable, sustainable water treatment method has been successfully demonstrated in Pennsylvania 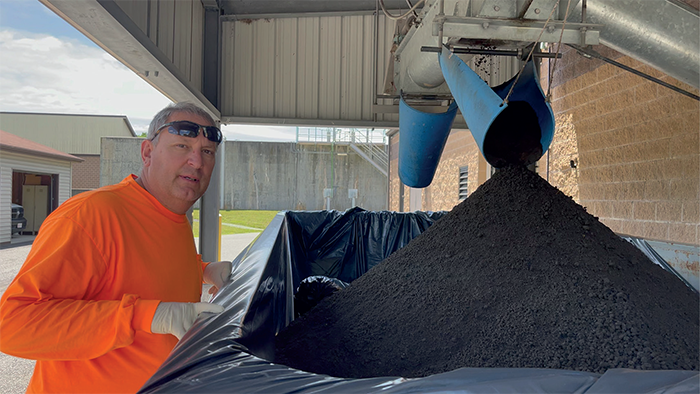 Silver Spring Township, Pennsylvania is currently the fastest growing community in the greater Harrisburg, PA area. The township’s wastewater treatment plant serves a population of approximately 18,000 residents with an average treatment of .8 MGD and design capacity of 1.2 MGD. Knowing the number of customers to be served will continue to rise, it was looking for solutions to give its annual budget some breathing room while increasing the plant’s overall efficiency and capacity to stay ahead of the increased demand. Lowering operating costs for aeration, sludge removal and structure maintenance were also goals.

Solution
Silver Spring accepted an opportunity to have a risk-free performance trial of a new autonomous bio-augmentation technology from Enbiorganic Technologies. The performancetrial would last for 60 days and at the conclusion, the city would have the option to keep the technology on a TaaS (Treatment as a Service) basis. A single EBS-Di unit from EnBiorganic Technologies (EBT) was set up by ABEL RECON, a licensed installer of EBT in one of Silver Spring’s lift stations approximately four miles from the treatment plant’s headworks. 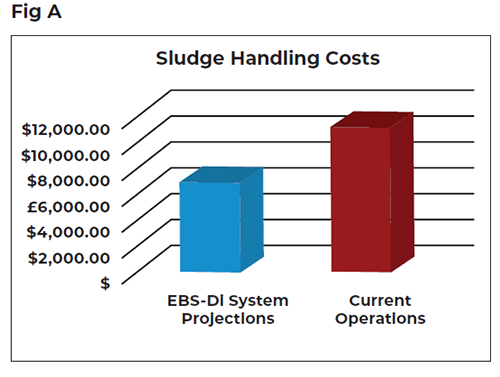 The EBS-Di unit utilizes a customized proprietary active state soil microbiology, custom-tailored by EBT to Silver Spring’s wastewater, that is autonomously delivered into its collection system using a patent-pending process which generates and activates the microbiology consortium. The microbes perform without oxygen, are highly adaptable and immediately went to work, rapidly dominating Silver Spring’s system.

Result
Within 60 days after installation, Silver Spring realized visible evidence of 23 percent biosolids removal, 63 percent total solids reduction, nearly 100 percent odor eradication and a significant reduction in FOG. The majority of the collection system being treated downstream of the installation location is cleaner with the existing biofilm being removed and replaced with EnBiorganic’s microbes in a very thin biofilm, which is treating the flow on its way to the treatment plant. Silver Spring collection system operators indicated that previous issues with FOG and overflows in this treated section of the system have all disappeared since the installation. Also noted was a change in effluent chambers, which are now noticeably cleaner and easier to maintain once treatment commenced. Algae growth which typically required pressure washing and physical scraping to remove, can now be eliminated by a normal water hose. Over time the microbes will continue to progress upstream and positively impact other portions of the system.

Demonstrated in Figure A, is the significant reduction in KWh used to operate the plant. Compared to the five months prior to installation, the EBS-Di system is providing 37 percent KWh reduction at an estimated savings of about $1600/month. Even compared to averages of the same months the year before or an aggregate of all KWh usage in 2021, this demonstrates a 28 percent reduction in energy consumption. 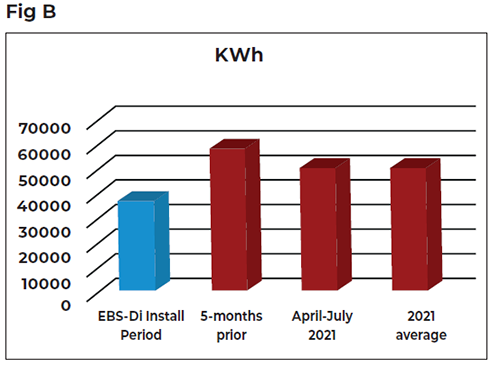 The second major impact is the reduction in water consumption utilized for sludge handling. Sludge processing has now become more efficient, and less water is being sent to the landfill. It is estimated that $18/ton reduction for sludge handling will be realized. The total sludge load has also been affected. Jim Stevens, operator at the plant noted that the plant may be down to as low as seven loads from the usual nine. With this data trend, it is anticipated that a 62 percent reduction in monthly sludge handling costs will also be gained.

As shown in Figure B, this will equate to approximately $4,284 per month in savings. Prior to the start of the performance trial an Economic Impact Report (EIR) was created to determine if the technology could provide benefit and to what degree. At only 90 days into operation, 46 percent of the total estimated savings anticipated by the EIR have already been reached and this will rise over time.

Due to the results, at the conclusion of the performance trial, Silver Springs decided to sign a long-term contract with ABEL RECON for the EBS-Di technology and service, realizing that the cost savings in sludge hauling, treatment energy needs and maintenance labor derived from having the unit would more than cover the expense for the service contract and put it on an excellent footing for meeting its growing community’s needs.

EnBiorganic Technologies
www.enbiorganic.com
EnBiorganic Technologies, founded in 2019, bridges science and technology to contribute to a living planet. It believes in synergy – various parts working together to produce an enhanced result, and is driven to build innovative solutions based on a foundation of solid science. Its team is focused on solving big issues that will have a significant impact in its backyard and beyond. Its current breakthroughs in wastewater solutions, HAB mediation and animal agriculture create value for clients, while protecting the planet’s most valuable resources